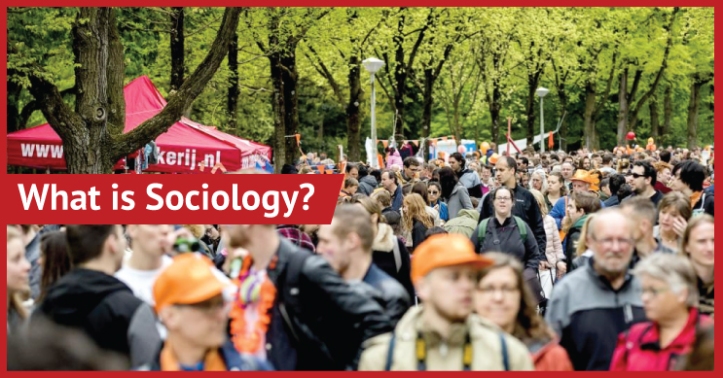 Sociology, which comes from a combination of Greek and Latin meaning “civic studies,” is a social science that primarily engages in the critical study human societies, their interactions, and the processes that preserve and change them. The concept was first formulated by the French positivist philosopher Auguste Comte more than a century ago, has since flourished, and is now taught at universities across the world. One of the foundational convictions of sociologists is that the phenomenon of human society and behaviour is important to study and understand.

Sociology as a Science

First and foremost sociology is a science that requires data collection and data analysis. Conclusions must be drawn from obtained data in a defensible logic supporting an overarching argument. Findings are evaluated through peer review from other scholars in the academic community. Sociology is empirical in that its data is obtained through experience of human society, which can include both qualitative (observations, interviews, living in communities being studied) and quantitative methods (usually involving numbers for inferential and statistical purposes). It is important that sociological theories are open to falsification (see Karl Popper). This means that the sociologist does not assume that only one theory is correct and is always open to a theory being falsified in light of future evidence. Most sociologists therefore do not view themselves as producing absolute and unchanging sociological truth, especially because human societies are constantly changing. Methodologies used by sociologists of history might not be applicable to modern societies, for example.

An explanation of personal quality is what Furseth and Repstad refer to as explanation from within. It states that an event or behaviour occurs because of the qualities of an individual. For example, a person plays rugby because it is in his character to enjoy the rough and tumble of controlled aggression. A person engages in a religious acts and rituals because she has a religious character.

Many sociologists, however, wish to dig deeper than explanations of personal quality as they find it leaves much of human behaviour unexplained. Although such explanations are no doubt important, sociologists also recognize the importance of taking into account the societal and environmental influences on human behaviour. Thus, an act, behaviour, or event must be understood through the social relations in which persons engage. People are constantly interacting with each people and are affected by interpersonal relationships. They “respond” to other people in various ways. They might learn from others, adjust their behaviour, object to the behaviour of others, choose to ignore them, or even find some behaviours irritating. Social relations can be direct or indirect/mediated. Direct influences would be learning from others by seeing them. Indirect/mediated is that which comes through mass media such as television, film, social media, and more.

Finally, explanations of social systems, sometimes referred to as “social laws”, focus on patterns and built-in regularities in society thought to influence human behaviour. However, not all sociologists agree to this as they reject the idea that societies evolve through inevitable social laws that act independently of human action. Many sociologists instead view social systems as human-made. They are convinced that human phenomena are socially constructed and therefore changeable. This thus brings into focus the debate between sociologists known as structuralists, who emphasize the structures of society, and those who emphasize human agency (i.e. human ability to change social structures). It remains useful nonetheless for sociologists to speak of social forces that affect human behaviour and social relations although there is debate over how strong these forces are and on how they might control human action.

An important focus area within contemporary sociology is the study of the interactions taking place between individuals and societal forms. Societal forms include frozen societal structures as well as dynamic patterns found in social relations. These can be found in two major forms: material and non-material. Material forms include tangible phenomena such as technology as extensive as bridges, roads, structures, public spaces, and digital technology. These are phenomena that people use together. For example, a man walking along a pavement will likely stop picking his nose as soon as he walks past a group of people or crosses paths with someone else. Also think of how social media, such as Facebook or Instagram, might influence one’s social behaviour. There are also non-Material societal forms. These include intangible phenomena that influence human behaviour, such as religious and moral traditions. Sociologists find that societal forms can be changed when people within society act together in oriented and coordinated ways.

Theorists of Harmony and Conflict

There are two very general types of theorists: those of harmony and those of conflict. The former emphasizes a harmonic view of society whereas the latter emphasizes social conflict, although some theorists have also attempted to combine the two perspectives. For example, Karl Marx and Rene Girard were theorists of social conflict. Girard was fascinated with the notion of conflict emerging from mimetic desire and the idea of scapegoating where society’s members pin their problems and tensions on a victim/s onto whom they exert punishment. There is also a sense of harmony here as Girard contended that scapegoating actually kept societies together by returning harmony to the community. Marx viewed the capitalist system of his day as one of gross exploitation and oppression. He thought that by producing a working-class of great number would result in the overthrowing of the capitalist order. A theorist of harmony might be seen in Talcott Parsons. Parsons argued that religions contribute to social integration although he also acknowledged that they can lead to social conflict. These different perspectives within sociology highlight the debate that hinges on the fundamental nature of conflict in society.

There are many other classical historic theorists who were integral in the development of sociology. Max Weber was fascinated with the origin of capitalism and argued that it emerged from ascetic Protestantism within the tumultuous Germany of his day. He was also concerned with the so-called disenchantment brought on by the progress of science and the urbanization and industrialization of society. The French sociologist and moral theorist Emile Durkheim concerned himself with an evolutionary functionalism positing the development of the simpler societies to the more complex. He also saw how religion and religious rites and symbols were significant in integrating society and keeping it together.