Ludwig Feuerbach’s Hypothesis of Religion as a ‘Projection’ 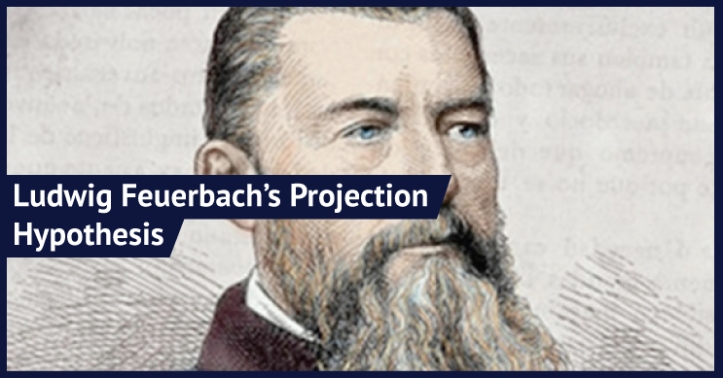 In his 1841 work The Essence of Christianity, the German anthropologist and philosopher Ludwig Feuerbach (1804-1872) presented a “projection theory” of religion. Historian of religion Ninian Smart says that “Feuerbach saw God as being a projection, by us, of essential human attributes, such as reason and love” (1).

According to this view, religion is nothing more than a human projection or abstraction into the cosmos of ideas that have purely human origins (2). It is the projection of the best qualities found within human nature, which are qualities that could have psychological, social, economic, or political origins. God is not “out there” as an existing agent, so to speak; rather, humans have invented the illusion of God and projected this illusion into the cosmos. In its essence, religion is deceptive, fallacious, delusional, and unreal as opposed to being factual. Feuerbach saw the self-realization of the illusion of God as being necessary for assisting human beings in getting on with dealing directly with real needs and desires in life. Rather than having people focus and waste energy on the supernatural and God, exposing the illusion of the God projection will divert human effort to areas where it is better needed, such as in improving their social and economic conditions. Feuerbach proposed that humanity’s obsession with religious imaginings is because he is divided against himself, or alienated from his own true being.

The projection hypothesis has been influential on other thinkers, notably Karl Marx, Friedrich Nietzsche, Sigmund Freud, and Emile Durkheim, each of whom adapted the view to elaborate their own ideas. Karl Marx accepted Christianity during his school and youth days but later came to reject Christian belief on philosophical grounds while at the University of Berlin. Marx was introduced to philosophy in greater detail, particularly that of Georg Hegel’s, and he soon became attracted to the Young Hegelians, the so-called “Doktorklub.” This group comprised high-school teachers, university lecturers, and several reputable academics such as Bruno Bauer (theology lecturer), Karl Koppen (history teacher), and Ludwig Feuerbach. They met in small cafes and private rooms, and often applied philosophy to religious ideas and theology. Much skepticism was promoted by these thinkers, notably pertaining to the Christian religion, Christian dogma, beliefs, Jesus Christ, and the gospels. Here Feuerbach’s ideas grew on Marx and informed his view that religion is the feel-good drug that alienated and oppressed classes turn to in order to alleviate the discontent brought on by their exploitation. According to sociologist Christian Smith, Feuerbach and these thinkers attempted to explain religion in non-theistic terms,

“Common among many of them (Durkheim being one exception) was the belief that religion is not ultimately natural to humanity, something that readily springs from human nature and the experience of life; rather, religion is an artificial fabrication imposed on humanity by misunderstood forces or subjugating agents” (3).

Perhaps a more modern application of Feuerbach’s projection hypothesis is sociologist Peter Berger’s suggestion that religion, viewed sociologically, can be reduced to a human projection. However, unlike Marx and Freud, Berger does not suggest that this means belief in God is false or fallacious. After all, it is possible that humans project God into the cosmos because something inside tells them that some gods or God or divine reality truly does exist “out there”; Berger explains,

“If a religious view of the world is posited, the anthropological ground of these projections may itself be a reality that includes both world and man, so that man’s ejaculations of meaning into the universe ultimately point to an all-embracing meaning in which he himself is grounded… This would imply that man projects ultimate meanings into reality because that reality is, indeed, ultimately meaningful, and because his own being contains and intends these same ultimate meanings” (4).

Christian Smith contends that a surge of recent scientific research on religion has called into question the ideas that religion and belief in God is somehow an aberration as supposed by Feuerbach, Marx, and Freud. To the contrary, the research shows that “religion is natural to how human perception, cognition, and explanation ordinarily work. The point of this research is not to defend the existence of God. It is all compatible with atheism, even if it does not require it. This recent body of scientific scholarship on religion merely observes—in contrast to the long history in the modern West of theorizing religion as unnatural—that religion is best understood as a normal and predictable result of the ways humans are “wired” and of their experiences in their natural and social environments” (5). As Justin Barrett concludes,

“Belief in God or gods is not some artificial intrusion into the natural state of human affairs. Rather, belief in gods generally and God particularly arises through the natural, ordinary operation of human minds in natural ordinary environments” (6).