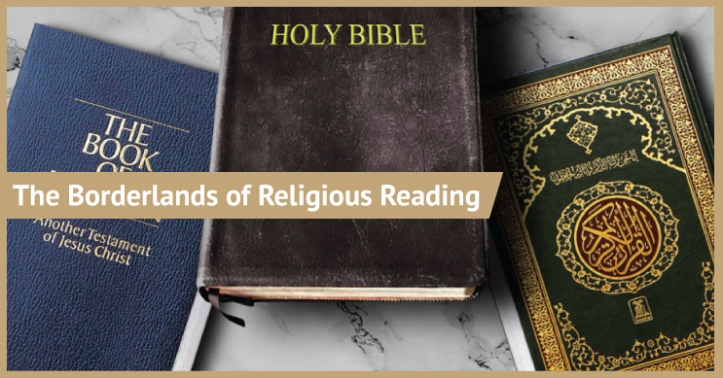 This is a summary of Professor Gavin Flood’s insightful article Dwelling on the Borders: Self, Text and World (1). Flood is the Professor of Hindu Studies and Comparative Religion at Oxford University. He is also well informed on the textual traditions of religion having studied the history of textual interpretation and authored a translation of the Bhagavad Gita.

It is best that this summary of Flood’s article be approached with caution as it cannot capture in full the nuance and complexity of his original article, although it tries to. It is therefore suggested that one read the article itself for a more accurate representation, although I have attempted to be accurate. The reason we have summarized Flood’s article is that I believe it to have potential for students and scholars of religion who wish to use a framework to analyze sacred texts and how religious persons and communities read and externalize them in the world. Hopefully this will become more clear as we proceed.

The Purpose of Studying Religious Reading

At the heart of religion, explains Flood, is the act of religious reading (“textual receptions”) which is the realization of the text (3). This is especially the case for scriptural religions and therefore of all the major “world religions.” Religious reading is central to the formation of traditions of religious persons and communities. It is not merely a private activity but also impacts upon pragmatic politics and discourse in the public realm. The act of religious reading is a way a text meets the world that has ramifications in the spheres of law, values, and art. According to Flood, this process occurs across three “borderlands” within which there is mediation. There is mediation between reading and world, inwardness and externality, and private religion and public governance.

The Three Borderlands of Religious Reading

Borderlands 1: The Realization of the Text

Religion is the engagement with a ritual sphere within which a text received from the past is realized within a present orality through repeated acts of religious reading (4). This reading is not only following words on a page but also aural and ritual reception. The reading of the text brings the reader into its presence and enlivens the voice of the text, a voice from the past being inserted into the present for a particular community of readers. To say that the texts contain a “voice” or “voices” from the past is to denote the sum totality of the authorial voices that have composed them. Such voices are enlivened by the present communities who set the text aside. However, not all voices of religious texts exist as many have been silenced because their communities no longer exist. Although there are other ways of reading a sacred text (for instance, as literature, myth, or as material for the purposes of textual criticism) the distinctive nature of religious reading is in hearing of this voice, which is brought into the present in the here and now. The voice of the reader becomes the voice of the text and the life of the reader is made to conform to the life of the text.

The realization of the text is also determined by the nature of the text itself. In other words, a text is not only set aside as ‘sacred’ by virtue of being marked by a community in this way but also because of it having qualities of openness allowing for it to be re-read and received new at each reception. Flood uses the example of the image of Moses receiving the words of God on the mountain and then communicating them to the human community to whom those words are alive in the continuous and present act of reading (5). Another example is the image of Vasugupta who, tradition claims, had a dream in which Shiva revealed to him the presence of the Shiva Sutras inscribed upon a stone at the top of Mahadeva Mountain. Upon retrieving the text he communicated it to a community that has kept the text alive.

An important feature of the first borderland is the temporality in the realization of the text. The realization of the text entails a particular configuration of temporality, meaning that its distant voice from the past is realized only in the present (in the here and now) for a community of reception. This involves a “temporary collapse” by conflating the past with the present (6). Using the example of Jesus Christ, Flood says that the collapsing of the past-present relation is evident in how for Christians, Christ, who lived two thousand years ago, still speaks today in scripture and liturgy. Similarly, for Hindus, mantras from the Veda have present, ritual force. This speaking from within the text is the realization of the text in the present. Handing over one’s agency to the text facilitates the internalization of the text, which carries on beyond the ritual sphere of religious reading itself. By consequence, the reader and/or community inhabit the tradition and the tradition flows through the community into future generations.

Borderlands 2: The Internalization of the Text

Borderlands 3: The Externalization of the Text

The externalization of the text is the text’s laying claim to the world, which is establishing the world under the control of the text (8). Externalization means that the realization of the text impacts upon life outside of the ritual sphere, such as in law, values, and art, and it determines patterns of living and social interaction within human worlds. The text is therefore cosmological and ethical in that a community must view itself within the cosmos ordered and articulated by the text. The text affects ethical performance in the extra-textual world in that ethical injunction becomes encoded in law. Religious law (i.e. the set of prohibitions and injections fundamental to religion) may be seen as a consequence of the realization of the text through a community of reception. The law becomes fundamental to extra-textual ways of being in the world for the community. Even secular law in the West has its foundations in religious law, itself a consequence of the realization of religious text. However, dilemmas arise when a religious text’s ethical and legal codes come into conflict with secular law. Religious reading brings a community into the world and links a tradition-specific subjectivity with forms of social and political institution and action.

The Differences Between Sacred Texts and Other Literature

Flood wishes to determine what is distinctive about sacred religious texts from other cultural products that could be classified under the title of ‘text’? (9).

He offers the following. First, a text is sacred by virtue of being set aside by a community as having special status. This could be the result of the text’s revealed nature (i.e. in the Qur’anic verses received by Muhammad or in the Veda received by ancient sages), because it has been inspired by a transcendent source or by supernatural events (i.e. the New Testament or the Bible is thought to be inspired by God), or because it narrates the life and teachings of a person who is revered for having a deep understanding of the nature of the world or of an otherworldly goal (i.e. Lao Tzu’s Tao-Te-Ching or the Pali canon of Theravada Buddhism).

Sacred texts also offer answers to questions of ultimate meaning and about life and death. Religious readers presuppose that the voice/s in their sacred texts have full and immediate present force. God, the prophet/s, the ages, and the saviour speak immediately to the community in and through the ancient text as it is received by its religious readers in the ritual sphere (10).

Also distinctive of religious reading is that their texts are guarded by tradition, embodied, mimetic, pervasive of doctrine, and, above all, ritual. That it is ritual renders it distinct from other kinds of reading. To say that religious reading is ritual is to say that it manifests within a ritual sphere within which a text received from the past is realized within the present (a “present orality”) (11). The text from the past is brought to life by a community in the present act of reading. This bringing to life of the text is also the text’s own participation in the authority of revelation that it lays claim to. However, the realization within the ritual sphere in the present does not negate the “pastness” of the text. Rather, the community reawakens the past voice of the text.

A final point of religious reading is mimesis. This means that the realization of the text in liturgy entails the body in the imitation of ritual acts where the reader imitates others as well as the text (12). The text becomes inscribed on the body through the liturgical act. Religious reading is thus also a bodily act involving gestures, postures, and expressions within a community of receptions. Indeed there are degrees of such inscription, which can include overt forms (i.e. touching parts of the body accompanied by the recitation of text) to more subtle inscription (i.e. the procession of the holy gifts in Orthodox liturgy).

A further distinctive mark, of which Flood draws from French philosopher Rene Girard, is the injunctive nature of a religious text (13). The primary characteristic of such texts is injunction: they command people to act or not to act. The Ten Commandments in the Hebrew Bible is a good example of what persons should not do. According to Flood,

“We can say that for their communities of reception sacred texts embody a voice from the past that has present force. Sacred texts are distinct from other genres because of the ways in which people habit them and kinds of textually mediated subjectivity the generate. Sacred texts make demands upon their readers to act and think in certain ways…” (14)

The Possibility of Application

I earlier noted the value in this framework/model concerning the possibility of its application to religion studies. Although it can certainly be applied to most religious traditions (not all religions have texts) I see its use within the field of alternative religions and new religious movements. How might, say, a pagan, perhaps a Wicca, read the writings of Gerald Gardner and Wicca: A Modern Practitioner’s Guide and use these to inform her idea of politics and discourse in the public realm? How does she “receive” this text? Does she read it in isolation or is it aural, or both? How is Gardner’s voice enlivened as a result of the collapse of the past and present in the ritual experience of the Wiccan community? How is the voice of Swami Prabhupada being enlivened in, say, an ISKCON temple in Durban, South Africa? What about the Bhagavad Gita in the life of a Hindu or the Qur’an in the life of a Sufi mystic? How does the Wiccan devotee “reconstruct” the text and use it to inform her religious identity? If she is a Wiccan who prefers reading alone rather than in a coven or in a small group, then how might she externalize this beyond the ritual sphere? Equally, how might a group of Wiccans or Jedis externalize their beliefs they’ve inscribed upon themselves through religious reading and ritual in the public sphere? What ethical injunction and prohibitions accompany religious reading for a Wiccan, or a Cargo cultist, or Raelian? There is no reason to suspect that religions will stop emerging, particularly as newer or more recent forms of “spirituality” continue to evolve and appropriate the content of other religious tradition. These persons and communities will constitute fertile ground for the scholar of religion who only needs an appropriate framework.

1. Flood, Gavin. 2009. “Dwelling on the Borders: Self, Text and World.” In Religion on the Borders: New Challengers in the Academic Study of Religion, 25-57. Stockholm: Sodertorn University.