What Was Ancient Greek Religion? 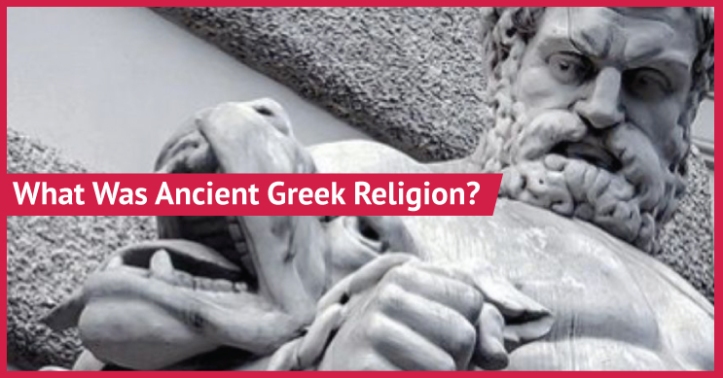 Religion was important to the ancient Greeks and found expression in their art, myths, rituals, practices, and traditions.

Greek religious belief was influenced by a people called the Pelasgi who occupied Greece prior to 1100 BCE. Pelasgi beliefs likely mixed with the beliefs of newer Greek-speaking people during the second millennium BCE and influenced later developments in religion. For instance, a sky-god believed in by the Pelasgi was adapted by the Greeks and renamed Zeus. Religion was at its peak in ancient Greece roughly from the time of the legendary poet Homer of the ninth or eighth century BCE until the fourth century CE. Largely due to military expansion by Alexander the Great, Greek beliefs spread throughout the Mediterranean world to newer areas such as Spain, Sicily, southern Italy, Asia Minor, and Marseille. These beliefs found new homes within poleis (city states) founded by the Greek colonists. Mystery cults flourished in this context while synchronization of religious belief was also common. There were fusions of Roman and Greek beliefs, with the former taking on the deities of the latter.

Unlike other religions and religious traditions developing at the time, the ancient Greeks, with the exception of some cults, had no collection of texts or sacred scriptures. They were primarily an oral culture which meant that religious traditions were passed on or down by word of mouth. This is reflected in Homer’s two epics which were not composed in writing but instead made use of similes, metaphors, and repetitive elements similar to a chorus. As an epic poet, Homer probably spoke and recited his work with a lyre in hand, and this demonstrated the method through which the ancient Greeks communicated their religious beliefs and traditions.

Rituals, sacrificial performances, and ceremonies continued on the historical tradition of honouring the gods. Rituals, led by authorities such as priests whose major responsibly was to keep the temple clean, were performed during ceremonies and on days of public festivals. The sacrifice of an animal was an offering made on an altar next to a statue of the gods. This was a devotional act and once killed, the blood of the animal was collected and poured over the altar. Its organs and bones were burnt in a fire as an offering. The ceremony was accompanied by hymns and prayers, and the flesh of the sacrificed animal would be consumed and the animal skins sold. Devotees also left valuable objects on the altars including vases, cauldrons, figurines, and lamps to honour a particular deity or make amends for past transgressions. The festival called Panathenaea was evidence of this devotion. It included sacrificial rituals and competitive events (athletic and equestrian events, as well as music and poetry) held quadrennially from the sixth century BCE until the third century CE. Athenians journeyed along a road known as the Sacred Way to the Acropolis where a large number of cattle would be slaughtered on the altar of Athena, the goddess of wisdom, knowledge, and reason, and protector deity of Greek cities, particularly Athens. There were many other important festivals such as the Thesmophoria (in honour of Demeter) Anthesteria and the Bacchanalia (in honour of Dionysus), and the Thargelia and the Pyanopsia (in honour of Apollo).

Polytheism and the gods

Ancient Greek religion was polytheistic because they believed in the existence of many gods and goddesses. These deities are together referred to as the Greek pantheon. The Greeks also believed in other supernatural spirit beings called nymphs, naiads, and dryads, and mythical entities such as the cyclops, hecatonchires, and others. Belief in the gods also changed over time: the primeval deity Eros (the god of chaos) was appropriated by later tradition into the son of the goddess Aphrodite.

If a person denied the existence of the gods it could often result in negative reactions from other Greeks. The Greeks were convinced that disbelief angered the deities, which meant that those who did not believe in the gods were uncommon. This did not mean that the gods were beyond critique, however, as a number of Greek thinkers critiqued them on moral and ethical grounds.

The most important Greek deities were the twelve Olympian gods and goddesses living on Mount Olympus. Only the twelve major deities lived on the mountain from where they could influence human affairs:

Although viewed as powerful and in possession of impressive abilities, the gods, including these twelve major ones residing on Mount Olympus, were not considered all-powerful or morally perfect. They were like human beings in many ways: they had human bodies, married, had children, engaged in affairs, fought each other, and had unique identities and interests. The gods were also associated with cities (Athena with Athens, Aphrodite with Corinth, Apollo with Delphi, etc.) where elaborate temples were constructed in devotion to them. Athens was home to the famous Acropolis with its array of magnificent structures including stoa, altars, sanctuaries, shrines, statues, and theatres.

The Oracles and Seers

Prophecy and wise counsel obtained by consulting the gods were important. The oracles were a counsel almost exclusively of women who entered trance-like states in which the gods communicated with them. Their messages would sometimes be interpreted by priests and if offerings were made the gods provided a more satisfactory response. The oracles were consulted on many important aspects of life, both political and personal. In 332 BCE, Alexander the Great is said to have visited the oracle of the Egyptian deity Amun after he conquered Egypt. Alexander had his rule sanctioned after the oracle acknowledged him to be the “son of Amun.” There was, however, limited access to the oracles, especially because a substantial offering was often required that made them more exclusive to the rich and powerful.

Ancient Greece also had seers or soothsayers. They were usually easier to access than the oracles and they often lent their services to the military. The military believed that the seers could interpret signs from the gods through observing birds, analyzing dreams, and in animal sacrifices.

The ancient Greeks believed the soul survived the death of the physical body. The souls of the dead went to an invisible realm, the underworld, that was ruled by the god Hades and his wife Persephone. There was also the undesirable prospect of Tartarus that at one point referred to a prison in the deepest region of the world located below the underworld. In Tartarus the gods kept their enemies before the realm became synonymous with the underworld in general. Far more appealing is the Elysian Plain thought to be a place of perfect happiness. Only those souls favoured by the gods, including heroes and demigods, were sent to this place. Another realm the soul might go to include the mourning fields, which is a place in the underworld designated for the souls of people who wasted their lives on unreturned love. There is also the Asphodel Meadows where souls of ordinary or mediocre people went. The Greeks described these places in fanciful ways. For example, numerous beasts including harpies, centaurs, and chimera are said to guard the doors to the underworld, while the Elysian Plain is portrayed as a place of islands and land devoid of snow, storms, and rain. In the plain cool breezes will blow and honey-sweet fruit, flowers of gold, and splendid trees will grow.