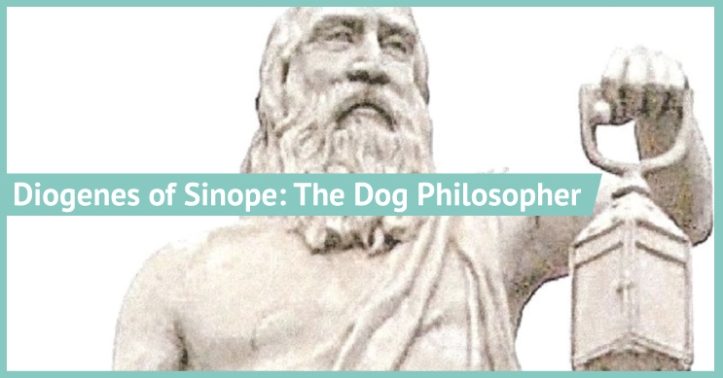 Diogenes of Sinope (d. 320 BCE), sometimes called “Diogenes the Dog”, was a larger than life individual and philosopher active during the Hellenistic Age of philosophy.

We do not have any sources authored by Diogenes himself so we must rely on later apocryphal documents and anecdotes. What we find in these is a fascinating and unique individual who promoted self-sufficiency and rejected the life of luxury. It is important to note that the Cynicism Diogenes founded was not a philosophical system like, say, the worldview promoted by Epicurus, but more a set of convictions communicated through lived example. As such, there are stories of Diogenes going around searching for an honest man in broad daylight with a lighted lantern, that he passionately rejected all aspects of tradition, and, perhaps most famously, that he lived an extreme life of asceticism.

Diogenes’ asceticism had him reject both tradition and the dictates of culture based on his conviction that the rules of civilized life were artificial, unnatural encumbrances that obstructed freedom and genuine happiness. For Diogenes, virtue is found in embracing and living by one’s natural endowments instead of pursuing happiness in fame, money, or in the accumulation of objects. In rejecting social and civil conventions, Diogenes would eat only through begging for food. He purportedly foraged in the marketplace, wore simple cloth, and slept in a wine barrel. Diogenes certainly manufactured quite the reputation for a number of shocking behaviours; these include defecating in a theatre, urinating in public, advocating free love, and engaging in public masturbation. Apparently he would shout at strangers in the street and make fun of their conformity to social and civil convention. Purportedly, people would yell back calling him a “dog”. In fact, this is where the name Cynicism comes from: Cynic comes from the Greek “kynikos”, which means “canine” or “dog-like”. And this is why we call Diogenes, “Diogenes the Dog.” Strikingly, in the midst of all of this, Diogenes was the ideal Cynic in his wretchedness and poverty, and he considered himself to be happy, fulfilled, free, and virtuous.

There is a Socratic element to how Diogenes engaged his fellow citizens. He would hound them in the Socratic method as a way to discover virtue. In fact, we find an entertaining anecdote telling of how Diogenes crashed one of Plato’s lectures: “When Plato was discoursing about his ‘ideas’, and using the nouns ‘tableness’ and ‘cypress’; ‘I, O Plato!’ Interrupted Diogenes, ‘see a table and a cup, but I see no tableness or cuppness.’ Plato made answer, ‘That is natural enough, for you have eyes, by which a cup and a table are contemplated; but you have not intellect, by which tableness and cypress are seen” (1). In another episode, Diogenes objected to Plato’s definition of the human as a “featherless biped”. Purportedly, Diogenes appeared with a plucked chicken saying “This is Plato’s man!”

Diogenes managed to attract some followers in his day, notably Crates of Thebes and Hipparchia of Maronea. Crates gave away a fortune to embrace his Cynic beliefs and Hipparchia was arguably the first known female philosopher. In some ways, Diogenes himself was similar to Jainism‘s founder in Mahavira. Although Diogenes and Mahavira held to very different worldviews and came from very different socio-cultural and historical contexts, they both seem to have shared the ideal of extreme rejection of a comfortable lifestyle by embracing asceticism and a life devoid of wealth and material possession.