The Development of the Scientific Study of History 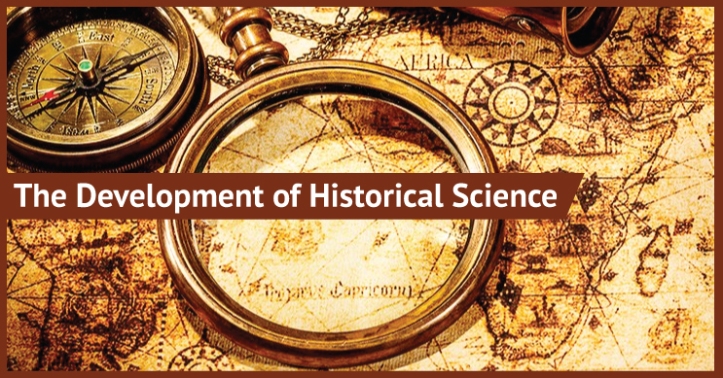 The historical sciences are the study of past cultures and civilizations. According to historian R. G. Collingwood (1889-1943), it is also the study of human life: “the value of history is that it teaches us what man has done and thus what man is” (1).

Ancient Tales and the Emergence of Greek and Roman Historians

Societies from the earliest times told stories about their origin and past. Such stories were imaginative tales centering on the acts of gods and heroes. There are also records of the actions of rulers, often inscribed on clay tablets or on the walls of temples and palaces. The earliest societies did not, however, try to engage in a systematic inquiry concerning the truth of the past. Writers did not attempt to distinguish between what had really happened and events consisting of myth and legend. This changed when several Greek historians and writers around the fifth century BCE, such as Herodotus (c. 484-425 BCE) and Thucydides (c. 460-400 BCE), first explored questions of the past through an interpretation of evidence. Thucydides’ History of the Peloponnesian War is considered to satisfy most criteria used by historians in modern historical study. His work incorporates testimonies from eyewitnesses to the conflict and evidences a keen interest in human agency rather than in divine intervention from the gods.

The rise of Rome in the Mediterranean world further produced historians of influence. Hellenistic historian Polybius (200-118 BCE) and the Roman historian Livy (59 BCE – 17 CE) both attempted to chronicle the rise of Rome describing its progress from its origin to the time of their writing. In China the historian Sima Qian (c. 145-87 BCE) engaged in a similar project as he attempted to trace Chinese history from the Yellow Emperor to the Han dynasty under Emperor Wu. Historians such as Herodotus, Thucydides, Polybius, Livy, Qian, and others were attempting to present history as universal (by making sense of events on a larger timescale), purposeful, and directive.

There were also attempts to combine history with moral reflection, notably to use it as a source for moral lessons. Cornelius Tacitus (56-120 CE), for instance, authored historical texts that examined the behaviour of heroes and villains. He emphasized the strengths and weaknesses of emperors and generals, particularly in their characters, and thus provided his readers with examples of historical people that should either be imitated or shunned. The Platonist philosopher Plutarch (c. 46-120 CE) authored an incredible number of works. His Parallel Lives, a collection of biographies on influential Greek and Roman persons, shows an interest in politics as well as character formation and thus recounts the deeds and characters of Greek and Roman soldiers, orators, legislators, and statesmen. Plutarch describes the military commander and statesman Themistocles (c. 524 – 459 BCE) as of “a vehement and impetuous nature, of a quick apprehension, and a strong and aspiring bent for action and great affairs,” and therefore as a morally exemplary individual of whom a reader might use for his or her own moral improvement. The much later French chronicler Jean Froissart (1337-1405 CE) also penned texts on chivalrous knights who fought in the Hundred Years’ War “so that brave men should be inspired thereby to follow such examples.”

Christian and Islamic Historians, and the Renaissance

The rise of the Christian religion in the late Roman Empire also changed how history was approached within European history. Christian historians and writers came to see historical events as divine providence, or the products of God’s will, and they often accepted historical accounts of miracles and martyrdoms without question. The Muslim world showed more skeptical sophistication in its approach to history. For example, Arab historian Ibn Khaldun (1332-1406) was critical of those who uncritically accepted fanciful accounts that could not be verified. Yet neither Muslim nor Christian historians produced the enormous corpus that the historians of the Song dynasty (r. 960-1279) did as demonstrated in their chronicle of Chinese history filling 294 volumes.

It was in Europe, particularly Western Europe, that modern historiography developed. The renaissance which began in fifteenth-century Italy emphasized the rediscovery of the past and its ideas spread throughout Europe and lasted up until the close of the sixteenth century. The study of history soon found its way into elite circles and many took to exploring ancient ruins in order to find and produce collections of old coins and inscriptions. Renaissance thinkers were inspired by classical history, particularly classical ideas on architecture, philosophy, politics, and military tactics. These new interests coupled with the advancements in printing made history available to a much wider audience than ever before.

Eighteenth-century Europe witnessed an increasingly sophisticated methodology used by thinkers. Europeans became far more concerned with obtaining facts of history and this led them to be more critical and careful of their sources. They also divided history into three main periods: Ancient, Medieval, and Modern. This periodization of history was also underpinned by value judgments. For instance, many in the Church during the Medieval period viewed ancient civilizations and peoples of earlier periods as espousing irrationality and barbarism, and as separate to the dignified world of modern Europe at the time. Similarly, numerous enlightenment theorists, thinkers, and philosophers wrote condescendingly of the “primitive” and “savage” peoples of ancient history. The influential German philosopher Georg Wilhelm Friedrich Hegel (1770-1831) articulated a grand scheme of history as a logical development. Hegel’s conception of history is one of a progressive development of human culture. It is a dialectical process in which better social forms emerge from less good ones and that through succeeding stages the human mind reaches higher levels of self-understanding. The philosopher and social revolutionary Karl Marx (1818-1883) later adapted Hegel’s scheme into a so-called grand narrative. Marx claimed that economic progress caused conflict between the social classes and would inevitably lead to the proletarian seizing power from the bourgeoisie, thus ushering in the collapse of the capitalist world order under its own inner contradictions.

The Professionalization of History

Much like other areas of knowledge, the nineteenth century saw the professionalization of history as it became an academic discipline and science prioritizing the accumulation of facts. There was a development of the historical-critical method as one sees particularly pronounced in historical Jesus Studies. Form Criticism developed and claimed that stories were passed on through various kinds of structures (forms) and that variations of these forms might provide clues as to what was original in a story as opposed to what was not. Archaeology also increasingly begun speaking to historical reconstruction. The development of the historical-critical method allowed historians from vastly different backgrounds and commitments to objectively propose and test claims about history.