Who are the Religiously Unaffiliated?

Moreover, the unaffiliated demographic is actually expected to decline in the share of the global population. Although this demographic is expected to grow in absolute number from 1.17 billion in 2015 to 1.20 billion in 2060, its increase will coincide with the growth of many religions. This will mean that thirteen percent (13%) of the world’s population in 2060 will be religiously unaffiliated, down from sixteen percent (16%) in 2015 [3].

The Religiosity of the Religiously Unaffiliated

For example, belief in God or a higher power stands at thirty percent (30%) of French unaffiliated. The majority (90%) of religiously unaffiliated Black Americans believe in God with forty-one percent (41%) believing in the God of the Bible, or another higher power (52%), and about half pray regularly, although few attend religious services [5]. Only two percent (2%) identify as agnostic and one percent (1%) as atheist. The majority of American unaffiliated adults (61%) believe in God and fifty-three percent (53%) in a personal God [6]. Notably, the sixty-one percent (61%) stat is a decrease from the seventy percent (70%) in 2007. Thirty-one percent (31%) of the religiously unaffiliated say God is an impersonal force and a quarter say God is best viewed as a person. A third say God does not exist.

In Canada, in 2000, forty percent (40%) of unaffiliated individuals in the country claimed to believe in God, and in 2005 thirty-five percent (35%) believed in some form of life after death [9]. In 2000, nineteen percent (19%) said they had experienced God’s presence, and thirteen percent (13%) said they prayed weekly.

The majority of the population is religiously unaffiliated and does not believe in God [10]. Seventy-two percent (72%) of Czechs do not identify with a religious group and forty-six percent (46%) describe their religion as “nothing in particular.” Twenty-five percent (25%) describe themselves as atheist. Sixty-six percent (66%) of Czechs say they do not believe in God, compared with twenty-nine percent (29%) who do.

But here we find the relevance of subjective religiosity. Although a majority of Czech’s say they do not believe in God, sixty-five percent (65%) believe in at least one of nine religious concepts (God, the soul, fate, miracles, heaven, magic/sorcery/witchcraft, reincarnation, the evil eye, and hell) [11]. Forty-four percent (44%) believe in the soul, forty-three percent (43%) in fate, thirty-seven percent (37%) in miracles, twenty-seven percent (27%) in heaven, twenty-four percent (24%) in magic/sorcery/witchcraft, twenty-three percent (23%) in reincarnation, twenty-one percent (21%) in the evil eye, and nineteen percent (19%) in hell.

As the sociologist of religion Rodney Stark argues, it is mistaken to think a country is “secular” based on its lack of church attendance or affiliation [12]. As the statistics in the Czech Republic show, it is difficult to argue that it is secular in terms of belief when a significant number still hold to religious concepts. The sociologist Dana Hamplová noted this relevant point,

“[T]he idea that Czechs are almost completely indifferent to any religion is not accurate. The apparent lack of interest in traditional forms of Christianity is accompanied by the massive popularity of what sociologists call “invisible” or “alternative” religion and what could be best described as a belief in magic. Czechs may not be very enthusiastic churchgoers but many of them easily accept the idea that fortune-tellers can predict the future, lucky charms bring good fortune or that the stars might influence their lives. While the numbers of evangelicals are still small and we can debate the real importance of their expansion, the substantial popularity of magic and superstition cannot be pushed aside as trivial. The growth of the evangelicalism, then, and persistence of an interest in the supernatural both suggest that, under the secular surface, many Czechs hunger after something beyond their everyday material world” [13].

Scholars have noted some important areas of discussion.

We must also note that the religiously unaffiliated demographic is itself broad. In this group of atheists, agnostics, and those who describe themselves as “nothing in particular,” there is great diversity. There are distinct philosophical differences among people claiming to be atheist, agnostic, and those who report traditional religious beliefs while being disenfranchised from organized religion [15]. According to sociologist Sarah Wilkins-Laflamme,

“There is some empirical evidence in the US and Europe supporting the fact that unaffiliated individuals do not form one homogenous secular group. Rather, they can be classified into different categories according to their levels of personal religiosity and anti-religious sentiment: believing without belonging (or unchurched believers), liminal nones (change from being unaffiliated to affiliated and back again), as well as active or ordinary atheists and agnostics… being unaffiliated in Northern Ireland still has strong political connotations, whereas for many Nordic and Catholic countries it refers more to distancing oneself from a specific institution which still has strong ties to the State. In the US, being unaffiliated may be considered more a matter of consumer choice in a religious market, or a reaction to the Religious Right” [16].

Moreover, changes in religious identity can have important consequences for individuals and societies. The affiliated and unaffiliated vary in several areas including patterns of family formation, educational attainment, civic engagement, health outcomes [17], and science knowledge and attitudes [18]. Changes in the unaffiliated share of populations could influence political elections as well as how science and religion are taught in schools. Further, the divergence in religious affiliation between regions could make communication across cultures more difficult and heighten geopolitical tensions as the unaffiliated and affiliated struggle to understand one another’s worldview.

Some areas open themselves up to exploration. Historically, it has been younger persons, persons without children, and persons with higher levels of education and a more liberal political stance who are more likely to claim no religion. Why is this the case? What is it with higher levels of education that makes one more likely to claim no religious affiliation? Questions such as this invite further inquiry into religious identity in the West.

3. Lipka, Michael., and McClendon, David. 2017. Why people with no religion are projected to decline as a share of the world’s population. Available.

11. Evans, Jonathan. 2017. Unlike their Central and Eastern European neighbors, most Czechs don’t believe in God. Available. 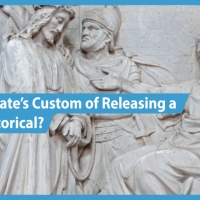