UFO Religions: What Do We Know About Them? 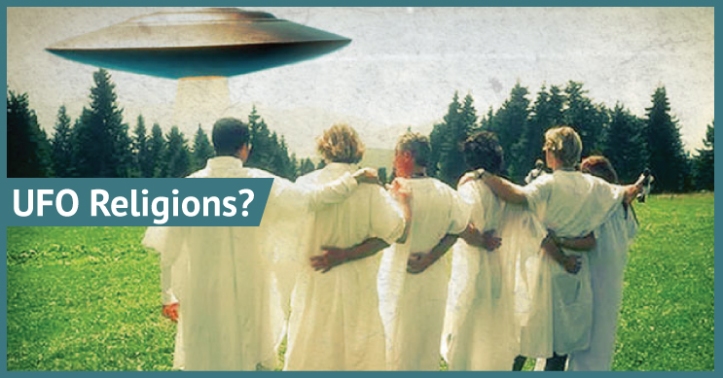 Interest in Extraterrestrial Life and UFOs

UFO religions and groups, which we use in the broader sense as described above, operate in a day and age when belief in flying saucers and in the existence of extraterrestrial life is common. Charles A. Ziegler, in his contribution to the Encyclopedic Sourcebook of UFO Religions (1998), analyzed various polls taken in the United States and concluded that “tens of millions of adults in the United States believe that some UFOs are manifestations of an un-Earthly intelligence. In other words, that belief is not confined to an aberrant few but, rather, it’s burgeoning in the last half of the twentieth century is a major cultural event that warrants further studies by social scientists, including those with special interests in religion” (2).

Indeed there exists scientific interest in this topic as evidenced by the funding of the search for extraterrestrial intelligence (SETI) projects. These scientists, and many other people, are interested in the possibility of life existing elsewhere in the universe as well as what types of cultures and religions might have developed in the experiences of these lifeforms. Presently current scientific research has found no convincing evidence of intelligent life elsewhere in the universe and no strong evidence of flying saucers or aliens on Earth, but the possibility that humans are not alone in the universe cannot be dismissed. Further, few would deny that extraterrestrial life raises religious questions. Astrotheology or exotheology is the part of theology that investigates theological questions that would need to be considered if extraterrestrial life exists and if this life ever made contact with human beings.

There has also been some debate on whether or not one can rightly classify UFO groups as religious or religions (3). A number of members within these groups attach very little if any religious or spiritual significance to their belief in UFOs, their UFO sightings, and/or the involvement of UFOs in human history. Some groups have avoided the term religious altogether, although there are also some interesting blends. For example, the Raelian Movement, is atheistic and has little issue with its identity as a religion, but still makes it clear that they are not the same as traditional religions, in which belief in the sacred or transcendent dominate. However, many scholars of religion, particularly influenced by the phenomenology of scholar Ninian Smart, are content to count a movement or phenomenon as religious if the seven dimensions Smart articulated can be applied. These include [1] the ritual or practical, [2] the doctrinal, [3] the mythic or narrative, [4] the experiential or emotional, [5] the ethical, [6] the organizational or social, and [7] the material or artistic (4). Smart’s framework is helpful to scholars of religion because it avoids them having to settle on an agreed definition of religion that, admittedly, has been elusive within academia. Applying these dimensions to UFO groups suggests that some of them have an elaborate ritual and/or mythology, while some do not.

UFO Religions and Their Characteristics

Moving on with the conviction that these groups are religions, we can now ask what they are and how many of them currently exist.

Answers to these questions can be provided thanks to the hard work of a number of scholars of religion and sociologists who have investigated this area of religion. Diana Tumminia has worked closely with the Unariuns or the Unarius Academy of Science (When Prophecy Never Fails: Myth and Reality in a Flying-saucer Group, 2005, and Alien Worlds: Social and Religious Dimensions of Extraterrestrial Contact, 2007), Susan Palmer has studied the Raelian movement in depth (Aliens Adored: Rael’s UFO Religion, 2004), James R. Lewis has produced the Encyclopedic Sourcebook of UFO Religions (1998), and Christopher Partridge UFO Religions (2003). Scott Scribner and John Saliba have made contributions to the study of the Aetherius Society while the contributions of Robert Balch and David Taylor to the study of Heaven’s Gate are well-known. Theodore Gabriel has studied the Nuwaubians and Christopher Helland the Ashtar Command. UFO religion has attracted a great deal of academic interest.

A birds-eye view of UFO religions suggests that these groups, despite their diversity, evidence some commonalities (5). The following are commonalities typical of some of the known groups that have formed in the second half of the twentieth century:

[1] – Common to all these groups is a belief in extraterrestrial beings who live mainly, but not exclusively, in our solar system. God (in the Judeo-Christian sense) seldom has a role in this belief system and is sometimes denied altogether. John A. Saliba writes that in some cases,

“God becomes an astronaut, a superior being who lives in a more advanced civilization in some other faraway galaxy. Divine revelations are nothing but teachings from space creatures and miracles are awesome interventions by intelligences who are technologically superior to the human race. The supernatural, in this view, is reduced to the super-technological. God is a superior humanoid creature living on another planet. He has made himself immortal through technology and has created the human race…” (6)

[2] – A major emphasis in UFO religions is on a relationship between aliens and human beings, which includes myths of human origin and stories of visits by aliens throughout human history. Raelianism holds that human beings were engineered by aliens in a lab and planted on Earth, a view which rejects the current theory of evolution. Aliens are always surrounded by a sense of mystery and are always regarded as transcendent entities superior to human beings.

[3] – Third, strong belief is placed upon a series of encounters and communications between human beings and aliens. In many instances, certain individuals are believed to be channels, messengers, or prophets chosen to relay messages to the human race. These individuals have personally met the aliens and have even been transported to other planets. The leaders of the Extraterrestrial Earth Mission, for instance, have claimed to be “walk-ins,” that is, individual alien beings who have inhabited the bodies of humans (7). Most common is for a single leader in these groups to have had contact with aliens, although some groups, like the Light side UFO Study Group, have several leading members all thought to be “walk-ins”.

[4] – There is a common conviction that aliens visit Earth to offer help to human beings. This involves warning humans of impending disasters, such as nuclear war and environmental crisis. Aliens are mostly viewed as beneficent although the existence of evil aliens is never ruled out.

[5] – A belief that through the help of the aliens, human beings will receive advanced technology as well as make great evolutionary strides in both the physical and spiritual realms.

[6] – A final commonality is that UFO groups teach the need for humans to make preparations for the public arrival of the aliens. These preparations are usually of a spiritual nature, but physical plans may also be proposed. In the Raëlian Movement, members have already designed an embassy to house the aliens when they arrive.

The Role of Religious Texts in UFO Religions

Often featuring within UFO religions are the sacred scriptures of other religions such as the Torah, Qur’an, the Bible, and even Buddhist texts. The Bible is particularly popular as it is believed to contain evidence of extraterrestrial influence in the course of human history (8). Members of UFO religions have attempted to restore a lost or repressed history in other sacred texts. On this point, Paul Brian Thomas remarks that,

“In many ways the authors of ET-inspired religious materials understand their work in restorative terms by offering readings of ancient texts that, in their eyes, restores the initial experiences of the authors. Adopting such a perspective implies certain levels of partisan evaluation, contending that current readings of ancient texts like the Bible are corrupted and that what is offered is a reversion to a more pure, unimpaired, and original reading” (9).

These reevaluations, rereadings, and revisions are based upon the conviction that sacred texts include evidence of contact, observance by, or interference on the part of alien intelligences. George Van Tassel (1910–1978), the founder of the Ministry of Universal Wisdom, argued that the Bible is a record of extraterrestrial activity and that the true history of humanity is hidden within its pages. Van Tassel claimed that he had managed to establish a telepathic connection with an extraterrestrial known as Ashtar.

How Many UFO Religious, Groups, and Members Are There?

It is difficult to provide a number or even an estimate on the total number of UFO religions currently in existence and how many members constitute these groups. What is clear is that UFO religions and groups have a notable presence on the internet. These include, although not limited to, the International Raelian Movement, Unarius Academy of Science, the Aetherius Society, Ashtar Command, The Ground Crew Project, Planetary Activation Organization, United Nuwaubian Nation of Moors, Universal Industrial Church of the New World Comforter, Extraterrestrial Earth Mission, and more, all of whom have official online pages for visitors and members. Most of these can be found in the English-speaking world, particularly in the United States, although a number of them also have members on different continents. Fiat Lux is a small UFO religion in Germany.

What makes it difficult to estimate the total number of members and devotees within these groups is that they seldom provide their membership numbers. However, we do know that the biggest of these groups is almost certainly Raelianism/Raelian Movement, which has, according to its own website, 85 000 members in 107 countries worldwide today (10), although some scholars think that these numbers could be inflated (11). If these stats are accurate they evidence growth as in 2000 Susan Palmer estimated Raelinism to have a membership of 45 000 across branches in 52 countries (12). The Deval UFO, Inc. is estimated to have 400 members in the United States, as well as members in Japan and Australia, and Heaven’s Gate had only 39 members at the time of the suicides in 1997 (13).

Going on these available statistics and estimates, these groups are mostly very small, especially in comparison to more traditional religions. A final point to note is that several UFO groups engage in regular communal worship services while others have little or none. Some have a core membership that lives communally, while members of other groups live independently, and the level of organization and commitment varies between groups considerably.

Leave a Reply to UFO Religions in South Africa: What Do We Know? – Bishop's Encyclopedia of Religion, Society and Philosophy Cancel reply