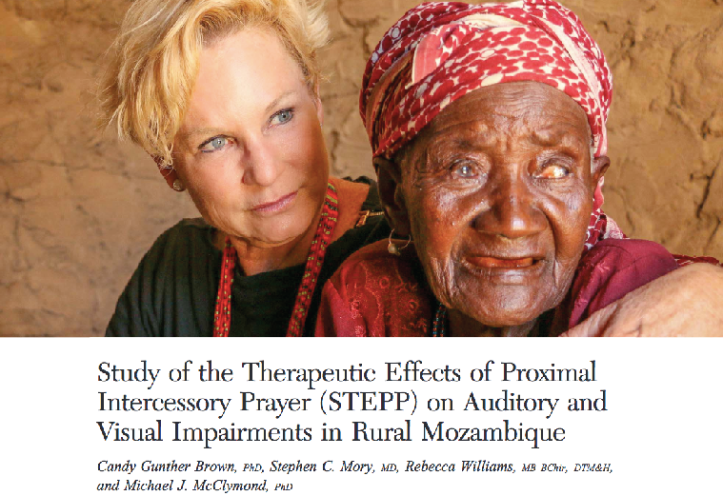 Heidi Baker is a well known Christian figure who has dedicated her life to ministry in the African country of Mozambique (1). Through stories coming from Baker’s compassionate work on the ground, there has been an arousal of academic interest in some events surrounding her.

Baker’s ministry has seemed to have garnered the reputation for remarkable occurrences, and it  was not too long until  it caught the attention of western scholar and researcher Candy Gunther Brown. Brown is a Professor in religious studies at Indiana University who has since identified Heidi as being “a hero to young women.” (2).

Brown was intrigued by the claims of healing and looked to examine them through scientific protocol (3). The study examined “proximal intercessory prayer” (PIP) meaning that the people prayed for were not at a distance away from the intercessor who was doing the praying. Rather than blind prayer studies where controlled groups are separated by distance and location, Brown’s study looked at “direct-contact prayer, frequently involving touch, by one or more persons on behalf of another” (p. 864). It is a prayer Brown says is similar to the New Testament accounts of Jesus and his disciples laying hands on the sick. At this point in the academic literature, proximal intercessory prayer has received little attention, and Brown’s study is an attempt to fill this gap.

She traveled to Mozambique with a small team where they would accompany Baker on her ministry outreaches. The study explains that,

“… the site was selected because Iris leaders are widely reputed among Pentecostals globally as “specialists” in praying for those with hearing and vision impairments—especially during village outreaches in rural Mozambique” (p. 865).

During evangelistic meetings blind and deaf persons were directed to designated spots to receive prayer for healing by Baker, Baker’s ministry team, and other Western and Mozambican affiliates. Through this Brown and her team were able to test 24 Mozambicans before and after prayer. The process of PIP included spending 1–15 minutes (sometimes an hour or more, circumstances permitting) administering proximal intercessory prayer. Hands were placed on the recipient’s head and sometimes the person was embraced in a hug, keeping their eyes open to observe results,

“In soft tones, they petitioned God to heal, invited the Holy Spirit’s anointing, and commanded healing and the departure of any evil spirits in Jesus’ name. Those who prayed then asked recipients whether they were healed. If recipients responded negatively or stated that the healing was partial, PIP was continued. If they answered in the affirmative, informal tests were conducted, such as asking recipients to repeat words or sounds (eg, hand claps) intoned from behind or to count fingers from roughly 30 cm away. If recipients were unable or partially able to perform tasks, PIP was continued for as long as circumstances permitted” (p. 865).

Brown’s team evaluated a consecutive series of 24 Mozambican subjects (19 males and 5 females) reporting auditory (14 subjects) and/or visual (11 subjects) impairments who received PIP. Only one subject reported having both a hearing and vision impairment.

To test hearing Brown’s team used a handheld audiometer (EarscanES3, Micro Audiometrics Corp, Murphy, N.C., calibrated 3 months prior to the study, with calibration valid for 12 months) to measure hearing thresholds. Ambient noise coming from the nearby crowd was taken into account and measured with a sound meter (Tenma model 72–935) in dB SPL in order to investigate whether or not it influenced readings. A total of 18 ears in 11 individuals with hearing impairments were analyzed, and subjects responded by button press on the audiometer or verbally.

Visual testing included testing 11 visually impaired subjects “using 40cm (6 subjects) and/or 6 m (5 subjects: this chart was used for elderly subjects reporting distant vision problems) logarithmic, “Illiterate E” visual acuity charts (Precision Vision, LaSalle, Ill.), using both eyes together, or with each eye separately as time allowed. The minimum measurable acuity was 6/120 on the 40-cm chart and 6/30 on the 6-m chart. A pre-measured string was used to hold charts at the appropriate distance. As researchers pointed to each letter, subjects pointed or verbally indicated which direction it faced; researchers did not indicate whether responses were correct making it less likely that subjects memorized the chart” (p. 866).

Where hearing is concerned,

“There was a highly significant improvement in hearing across the 18 ears of 11 subjects (t(10)3.93,P0.003,two-tailed) (Fig. 1). Two subjects showed hearing thresholds reduced by over 50 dB HL. AN was very high during testing (50–100 dB SPL), but AN (85 dB SPL), calculated for eachsubject individually as the average of the minimum and maximum noise during measurement was unchanged between pre- and post-PIP tests (t(10)-0.48,P0.64, two-tailed), indicating that AN was not likely to be a confound (Fig. 1,A). The average 3 kHz threshold after PIP was 49.4 dB HL,which was slightly high, perhaps due to high AN” (p. 866). 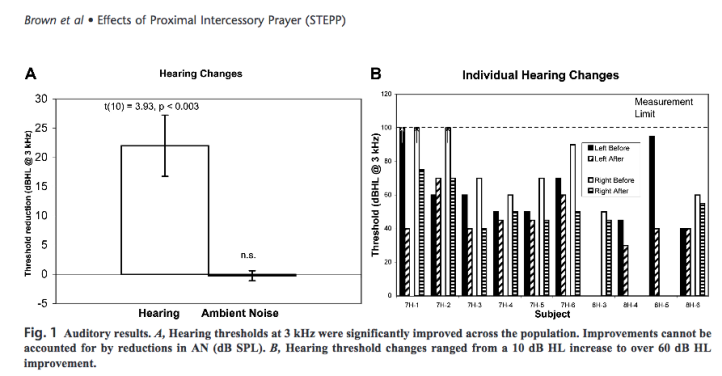 “Significant visual improvements (both difference and ratio of before vs after) were seen across the tested population (Wilcoxon signed rank test z2.49,P0.02, two-tailed) (Fig. 2,A). Three of eleven subjects improved from 6/120 or worse to 6/24 or better, and one subject improved from unable to count fingers at 30 cm (6/2400) to 6/38 (Fig. 2,B). All but one vision subject was tested in broad daylight; the remaining subject was tested after dark, with electricity provided by generator-powered stage lights and a flash-light (See Subject E in Supplemental Digital Content, http://links.lww.com/SMJ/A1); the lighting level did not appear improved between the pre- and post- test (conducted less than one minute later), making it unlikely that variable lighting was a confound” (p. 877).

What Accounts for these Remarkable Results?

The study then matches the data to possible explanations accounting for the visual and hearing improvements. This includes hypnosis because some have suggested hypnosis to result in statistically significant visual acuity improvement. But this is disqualified given that several studies of hypnotic suggestion showed an average 2 or 2.5 times increase in visual acuity, while other studies reported no improvement in vision or auditory thresholds after hypnotic suggestion. However, in Brown’s PIP study, the average visual acuity improvement measured was over tenfold, significantly higher than in suggestion or hypnosis studies. 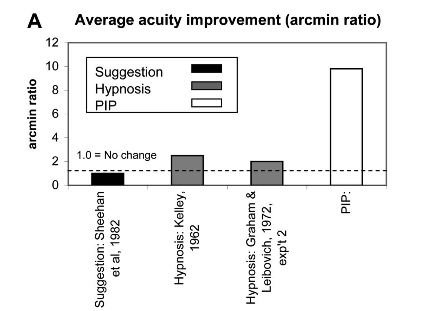 What about demand effects? According to the study,

“demand effects may also account for some cases in which subjects reported improved hearing (but not vision) despite no measurable improvement. It should be noted, however, that in the Mozambican cultural context, traditional healers typically charge clients more when healing occurs; thus, subjects may have been predisposed to minimize reporting post-PIP improvements… It seems much less likely that subjects who went from being unable to read a single line (in which case it is unclear that this experience constituted practice) to reading far down the chart were exhibiting practice effects” (p. 867-868)

“Practice effects might also have contributed to some observed improvement, but these would also be present in hypnosis studies to similar degrees and therefore may not fully account for the larger effects observed here. Further-more, the amount of practice was minimal at best. Subjects with measurable hearing thresholds experienced the test tones of a given frequency only a few times in each ear, following the Carhart-Jerger protocol.” (p. 867)

The Three Findings of the Study

The study has three main findings (p. 868). The clearest finding is that the PIP assisted improvements:

“First, Mozambican subjects did exhibit improved auditory and/or visual acuity subsequent to PIP interventions. Second, the magnitude of measured effects exceeds that reported in previous studies of suggestion and hypnosis.”

Third, and most striking, is that the study suggests that PIP may be a useful adjunct to standard medical care,

“Although it would be unwise to over generalize from these preliminary findings for a small number of PIP practitioners and subjects collected in far-from-ideal field conditions, future study seems warranted to assess whether PIP may be a useful adjunct to standard medical care for certain patients with auditory and/or visual impairments, especially in contexts where access to conventional treatment is limited.”

Beyond this study, Baker’s ministry has been associated with some other remarkable claims including the multiplying of food (4), to raising the dead which have led thousands to Christ. Professor Craig Keener in his two volume work on the subject of miracles explains that “Unless one works from controlling  presuppositions that miracles cannot occur, most would consider the Bakers credible sources” (5). Keener has interacted with several eyewitnesses who have all attested to miraculous occurrences within Baker’s ministry. This included a “young filmmaker” who witnessed  hearing being restored to the deaf, which is what Brown’s study itself demonstrated. Amanda Hammill Kaminski, who had met Heidi Baker through YWAM, informed Keener that her roommate had spent some time working with Baker and during that time witnessed numerous conspicuously visible miracles. Another eyewitness, Kathy Evans, who works with the Bakers’ ministry, visited them with a team of students and witnessed a middle-aged man born deaf being fully healed. According to Keener there are multiple, credible “independently confirmed reports about the ministry of the Bakers and their Mozambican colleagues…” According to Baker the formula is simple, “When we walk as Jesus walked, we will be blessed.” 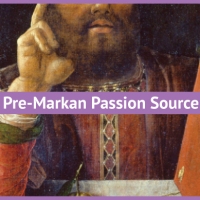 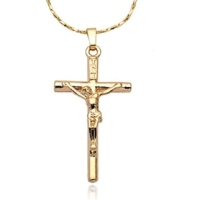