The Historicity of the Empty Tomb 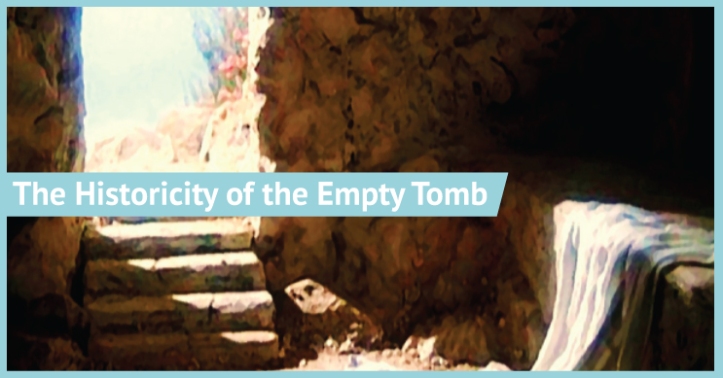 According to the gospel narratives, some women, seeking to anoint Jesus Christ’s recently crucified body with spices and perfume, discovered the tomb in which Christ was buried to be empty. However, what is the historical evidence for accepting the empty tomb as a historical fact? According to historian Gary Habermas,

“An intriguing development in recent theological research is that a strong majority of contemporary critical scholars seem to support, at least to some extent, the view that Jesus was buried in a tomb that was subsequently discovered to be empty” (1).

Habermas came to this conclusion after examining over three thousand journal articles penned by historical scholars, leading and fringe scholars alike, over the last few decades. Habermas has also noted “more than 20 arguments that have been cited in favor of the empty tomb,” some of which are included in this analysis.

The empty tomb story is found in some of the earliest historical data which means that it is not only valuable for learning about what the earliest Christians believed but that it is also not a later myth or legend.

A creed handed down to Paul can be found in 1 Corinthians 15: 1-11 that has been dated to within five years of Christ’s death. According to historian Gerd Ludemann, “…the elements in the tradition are to be dated to the first two years after the crucifixion of Jesus…not later than three years… the formation of the appearance traditions mentioned in 1 Cor. 15:3-8 falls into the time between 30 and 33 C.E” (2). In this creed, the Apostle Paul, although not referring to the empty tomb directly, implies it. The important part of the creed is conveyed as follows:

It would seems that Paul indirectly implies that Christ’s tomb was found empty, as William Lane Craig has noted, “For in saying that Jesus died — was buried — was raised — appeared, one automatically implies that the empty grave has been left behind” (3).

If this is a reasonable interpretation of this creed, then it would suggest Christ’s tomb was not only attested to and believed by Paul himself but that it was a belief of the earliest Christians, which means it cannot be explained away as a later legend or myth. According to Habermas,

“That Paul does not specifically mention the empty tomb keeps this from being as strong a point as it could have been. Still, to say so clearly that Jesus’ dead body was buried, raised, and appeared would be a rather strange process unless the tomb had been vacated in the process” (4).

Further, as will be noted shortly, the empty tomb narrative is also found within the pre-Markan passion narrative that is dated shortly after Christ’s crucifixion.

Independent attestation is one criterion within the criteria of authenticity, which says that if a tradition appears in an early source and in another independent source, then not only is it early, but it is also unlikely to have been made up. In terms of independent attestation all four canonical gospels (Mark 16, Matthew 28, Luke 24, John 20) attest to the empty tomb, Paul implies it in an early creed (1 Cor. 15:1-11), and it is further implied by Peter’s sermon in Acts. Attestation to the empty tomb is also early as it is found within the pre-Markan passion narrative (as well as the pre-Pauline creed of 1 Corinthians 15). According to Craig, this source is likely dependent on eyewitness testimony,

“The burial account is part of Mark’s source material for the story of Jesus’ Passion. This is a very early source which is probably based on eyewitness testimony and dates to within several years of Jesus’ crucifixion” (7).

And likewise attests to the empty tomb, “Mark’s Passion source didn’t end with Jesus’ burial, but with the story of the empty tomb, which is tied to the burial account verbally and grammatically.”

Scholar Gerd Theissen provides a date for this passion narrative,

“The date could also be pinpointed: parts of the Passion account would have to have been composed within the generation of the eyewitnesses and their contemporaries, that is, somewhere between 30 and 60 C.E” (8).

If this is a reasonable dating of the narrative then one is dealing with very early historical data, which is no doubt very valuable. Regarding independent attestation, the Gospel of John is independent of the synoptic gospels yet also attests to the empty tomb,

“Careful comparison of the texts of Mark and John indicate that neither of these Gospels is dependent on the other. Yet they have a number of incidents in common: For example, the burial of Jesus in the tomb of Joseph of Arimathea” (9).

So alongside the pre-Markan passion narrative (of Mark), we also have the Gospel of John. Craig also identifies how the Gospel of Luke and the Gospel of Matthew have earlier independent traditions of the empty tomb story,

“As for the other Gospels, that Matthew has an independent tradition of the empty tomb is evident not only from the non-Matthean vocabulary (e.g., the words translated “on the next day,” “the preparation day,” “deceiver,” “guard [of soldiers],” “to make secure,” “to seal”; the expression “on the third day” is also non-Matthean, for he everywhere else uses “after three days;” the expression “chief priests and Pharisees” never appears in Mark or Luke and is also unusual for Matthew), but also from Matt. 28.15: “this story has been spread among Jews till this day,” indicative of a tradition history of disputes with Jewish non-Christians.”

Regarding the Gospel of Luke (and John),

When all the sources are considered historians are dealing with several independent materials, some of which are early, attesting to the historicity of the empty tomb. According to Habermas, the “empty tomb is reported in at least three, if not four, of these Gospel sources. This helps to understand why these items are taken so seriously by contemporary critical scholars” (10).

The Empty Tomb was a Part of Earliest Christian Preaching

Evidence from the book of Acts suggests that the empty tomb was part of the earliest Christian preaching efforts on the part of the Apostle Paul (Acts 2:29-32). It is implied in the contrast Paul makes between David’s tomb and the tomb of Christ’s,

“Fellow Israelites, I can tell you confidently that the patriarch David died and was buried, and his tomb is here to this day… God has raised this Jesus to life, and we are all witnesses of it” (2:30-32, emphasis added)

Acts 13 contains an early tradition in the form of an early sermon, also attributed to Paul which implies the empty tomb,

“Now when David had served God’s purpose in his own generation, he fell asleep; he was buried with his ancestors and his body decayed. But the one whom God raised from the dead did not see decay” (13:36-38)

Not only is the empty tomb implied in the earliest Christian preaching, but it is also implied in the creed of 1 Corinthians (as we noted above). Perhaps this is one of the reasons that scholar Michael Grant concludes that “the evidence is firm and plausible enough to necessitate the conclusion that the tomb was indeed found empty” (11).

According to Habermas one of the most powerful arguments in favour of Christ’s empty tomb is the location and events surrounding it. All of the gospel sources agree that Christ was buried in a tomb located in Jerusalem. Jerusalem is also the location most scholars agree was where early Christian preaching first took place, which led to the birth of the Church.

However, it seems only natural that any Christian preaching at this very early time would have come to a halt should Christ’s tomb not have been empty or discovered empty. If Christ’s body still remained in the tomb at the time Christians were preaching he had been raised physically from the dead by God, then Christianity would have likely come to a grinding halt as well as be exposed as a lie. After all, it would have been perhaps the easiest way to disprove the early Christian message of a resurrected saviour by going to the tomb where Jesus was buried (which was close to both his place of crucifixion and ideological opponents) and expose it. It is unlikely that Jerusalem would have been the place that Christianity would have taken off if Christ was still in his grave. The theologian Paul Althaus (1888-1966) commented that the resurrection proclamation “could not have been maintained in Jerusalem for a single day, for a single hour, if the emptiness of the tomb had not been established as a fact for all concerned” (5).

The argument is that the best historical explanation is that Chris’s tomb was indeed empty. Like Althaus, Craig writes that “It would have been impossible for the resurrection faith to survive in face of a tomb containing the corpse of Jesus” (6)

“A woman, it [the law] says, is inferior to a man in all respects. So, let her obey, not that she may be abused, but that she may be ruled; for God has given power to the man… But let not the testimony of women be admitted, on account of the levity and boldness of their sex.”

According to Flavius women (in the first century) were viewed as inferior to men which meant that their testimony was also deemed inferior. With this detail in mind, it must strike one as significant that all four gospels agree unanimously that women were the first witnesses to the empty tomb. The women play a very central role in the earliest attestation to the resurrection itself. The natural question to follow would then by why would the male writers, within a patriarchal society with a very low view on a woman’s worth, testify (unanimously) that women were the first to discover the tomb if they never in fact were?

This is a good question because if the empty tomb narrative was fabricated it would have been unlikely for the authors to make the women play the central role in its discovery. Why not just make it men to discover the empty tomb? Their testimony would have been far more likely to be believed and would have carried more weight than women. The fact that women discovered the empty tomb first would have been counterproductive to the claims of the early Christians given the social and cultural context in which this story was told. The best explanation must be that the earliest eyewitnesses and the gospel authors themselves were convinced that it was women who found the tomb to be empty before reporting it to the male disciples. Habermas explains that “This argument is very widely recognized and few scholars have challenged it, which testifies to its strength.”

The empty tomb narratives evidence a lack of later theological motifs that legend might be expected to contain. The argument is that this is because the eyewitnesses attempted to recount what they saw, which, given its unadorned nature, suggests that the empty tomb account is early and factual. According to Craig, the empty tomb is credible as “it was not an apologetic device of early Christians,” rather “it was, as Wilckens nicely puts it, ‘a trophy of God’s victory’” (12). That the male disciples never saw the empty tomb as proof supports that the narrative is substantially uncoloured by apologetic motifs and in its earliest form.

Most Historians Accept the Empty Tomb as a Fact

3. Craig, W. The Historicity of the Empty Tomb of Jesus. Available.

10. Habermas, G. 2005. Recent Perspectives on the Reliability of the Gospels. Available.

12. Craig, W. The Historicity of the Empty Tomb of Jesus. Available.