How Science Led Me to A Deeper Faith. 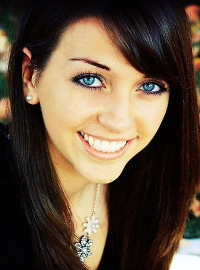 By Hannah Birky – a major in Cell and Molecular Biology.

“As a cell & molecular biology major studying at a Christian liberal arts school, science and faith have often been at the forefront of my life in the past four years. I experienced conflicts between the two, but not the kind of conflicts you might expect. I never felt that I had to choose between my Christian beliefs and my scientific understanding of the world; rather, I had hard time developing enthusiasm for molecular biology as a spectacular piece of God’s creation. To me, molecular biology was abstract, hard to study, and somewhat distant from the world I could see and feel. I knew, of course, that molecular biology was an important field, especially in terms of human health, but I had a hard time caring or seeing the beauty in it. Transcription factors and the sodium-potassium pump didn’t exactly cause me to fall on my knees in worship. But somewhere along the last few years of my life, God took me from a reluctant cell & molecular biology major to a potential Ph.D. candidate in the life sciences.

I started my senior year of college with little clue what I wanted to do after I graduated. I had been studying molecular biology for the past three years, waffling countless times back and forth between medical school and graduate school. I was nearly ready to just scrap it all and start over in the humanities. A career as a physician was becoming less and less appealing, and two summers of biological research had left me feeling inadequate and burnt out. I was exhausted by science, I felt that my choice of major had been a mistake, and I believed that I might find more fulfillment in subjects such as philosophy or literature.

Such was my mindset on the rainy, late August day that I took a road trip down to see my brother at his college a few hours away. I needed to get away from campus, and I loved the peacefulness of the many miles of corn fields between my brother’s campus and mine. It proved to be a good time for me to hear God speak. I realized as I got farther and farther away from my campus and my science textbooks that I hadn’t really been seeking God’s presence in my busy and overwhelming life. My weariness and lack of peace, it became clear, were largely due the low priority I had placed on my relationship with Jesus. Something clicked that day, and on that rainy drive down I began to pray that I would see God’s hand moving in my life again. God answered that prayer almost immediately, and I returned to school the next day with my heart nearly bursting with the joy of experiencing his goodness. I began to see that he could and would guide my career track if I would seek him out.

On that trip, I also gave God the opportunity for a good laugh. I drove with a guy from my school whose brother lives with mine, and we had a conversation about our Christian college’s upcoming annual “Spiritual Emphasis Week”, a time of deliberately seeking God’s voice. In that conversation, I expressed my frustration that many students walked away from that week believing that they had been called to missions or ministry or the like, but rarely did a student end the week feeling called to pursue engineering or scientific research. Science really was not right for me, I told him, but it was certainly bothersome to see science so low on the totem pole in the eyes of my Christian peers. Couldn’t they see how important the study of science was to the kingdom of God?

Spiritual Emphasis Week rolled around, and I became, ironically, the change I wanted to see in the world. Though I never had really felt a calling on my life before, in that week God called me to stick with science. My half-hatched plan to pack my bags, run away from home, and join the humanities majors came to an abrupt end; God stopped me before I even made it out the front door and sent me back up to my room for an attitude adjustment. When I submitted to his will for me, I began to see the goodness in his plan. He made it clear to me that my frustration with biological research stemmed from my lack of experience and feelings of inadequacy, and that those were not good reasons to give up. He gave me hope that if I persevered, molecular biology would become more intuitive and more interesting to me. He reminded me of how well the research work environment had suited me during the past two summers, and he showed me just how much I loved participating in scientific discovery, though I had never realized it before. Most amazing to me, he opened my eyes to the ways in which he had been preparing me for this route all along: that I had stuck with my cell & molecular biology major and participated in two summer research internships was no accident. He had set me up perfectly to pursue graduate study in molecular genetics, despite my attitude of reluctance every step of the way.

As time has gone on and I’ve begun to apply to various graduate schools, I’ve become more and more excited about the path God has placed me on. I love the collaborative aspect of working in an academic lab, and I love having the opportunity to discover something new with every project. Furthermore, I’ve discovered that when I get past the intellectual difficulty of it, I have a fascination with human genetics. God knew what he was doing when he set me on this path, and he has guided me even during the years when I felt entirely lost and unenthused.

Science is often seen as the enemy of faith, but in my life it has been exactly the opposite. God has used both my personal journey into the research profession and my growing knowledge of molecular biology, chemistry, and physics to reveal himself to me. It makes sense, really. We as Christians cannot claim that the world belongs to God and at the same time distrust the systematic study of it. We must engage science, because to view science as a danger to our faith is to miss God’s majesty displayed all across nature. More than that, we must learn to approach science with enthusiasm, despite its difficulties. Science shows us the incredible complexity and beauty of our world, and it can lead us to a deeper and deeper understanding of our majestic God. A reconciliation of Christianity and science is vitally important to the kingdom of God, and I am hopeful that reconciliation has begun. I look forward to participating in it as a Christian in science, and I’m so thankful that God has led me where he has.”